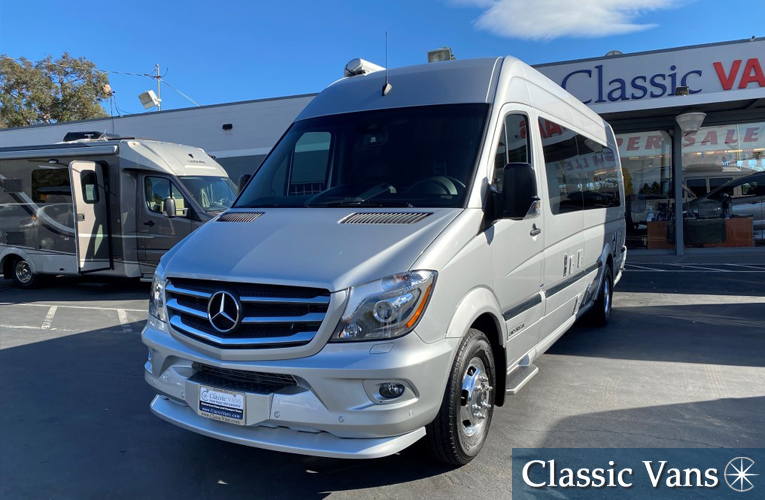 It’s true that fewer and fewer products can boast this label than in decades past thanks to increased globalization and overseas competition. But one RV and travel trailer manufacturer that has always been synonymous with the American road trip and camping experience is Airstream.

When most folks hear the name “Airstream,” they think of the retro, spaceship-esque travel trailer that was a common sight on American roads in decades past and has seen a resurgence in recent years. But Airstream’s offerings go far beyond these class, but spartan, travel trailers. More recently, the company has partnered with Mercedes Benz to deliver a Class B motorhome that is the epitome of luxury, comfort and dependability. 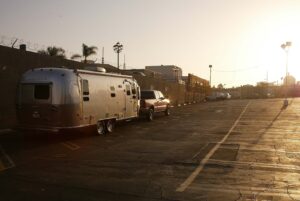 First established in 1929, the Airstream story started when founder Wally Byam built his first travel trailer out of Masonite as a hobby in his Los Angeles backyard. Byam’s company soon became one of the nation’s leading RV manufacturers.

Airstream’s first big hit in the trailer market was in 1936 with the introduction of the Clipper, an aluminum-clad trailer that took its name from the trans-Atlantic seaplane. The Clipper trailer contained its own water supply, slept 4, contained a small kitchen and electrical lighting, and was relatively affordably priced at $1,200 (roughly equivalent to $23,000 today).

The start of World War II caused the company to temporarily close its doors for a time, and it didn’t start making trailers again until 1948. Following WWII, Airstream really took off, selling tens of thousands of trailers and motorhomes to Americans with more leisure time and cash to spend—and who were eager to explore the country.

While primarily known for their travel trailers, Airstream is no stranger to the world of campervans and motorhomes. The company often thought about expanding into motorhomes in the 1960s but didn’t actually do so until 1974, when they began manufacturing the Argosy—a Class A rig that came in 20-foot and 24-foot models with painted aluminum. Unpainted aluminum versions of the Argosy first appeared in 1979.

Airstream also reimagined its famous aluminum shell onto a Chevrolet truck chassis. These rigs were famously seen as transports for NASA astronauts during the Apollo and space shuttle missions, and astronauts spent time isolating themselves inside Airstreams when they returned from the moon.

Following in the footsteps of the successful Class A Argosy motorhome from the 1980s and 1990s, Airstream decided to partner with Mercedes-Benz in the early 2000s to utilize their full-size Sprinter van chassis to build Class B motorhomes. The result was introduced to the public in 2004 as the Airstream Interstate.

Today, Airstream is a part of Thor Industries, one of the largest trailer and motorhome construction conglomerates in North America. The company employs about 800 people in Jackson Center, Ohio.

Airstream is the oldest RV manufacturer in the industry. 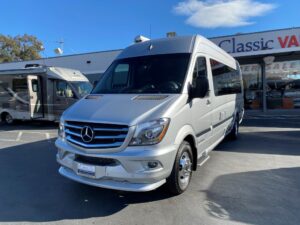 The Interstate is offered primarily in 2 models: the 24GL and 24GT. (For many years, these rigs were called the Grand Tour EXT and Lounge EXT.) Both models offer a wide array of seating options, ranging from 2 to 9 people, and they have an overall length of 24 feet with a width of just under 7 feet. Counting air conditioning and the roof antenna, these Class B’s are an inch under 10 feet tall.

You can order your Interstate in white, black, or any shade of grey you want, and interior color choices are either grey or tan. Some Interstates come from the factory with black interiors.

The interior of the latest Interstate models features adjustable LED lighting, a Fantastic Fan with rain sensor, flush-mount cabinetry, Marine-woven synthetic flooring, powered day/night window shades, power rear sofa, a modular solid table and USB charging ports. It’s also possible to use the front of the rig as a bed thanks to the aftermarket, which allows for a single person to spread out in the cockpit.

While the Interstate can carry up to 9 people (8 passengers and 1 driver), the rig is best suited for sleeping 2 inside (so bring a tent or 2!). Like all things Airstream, interior designers and builders make the most out of every inch of space, cramming a remarkable number of standard features into every model.

Common features and modern amenities include:

The Airstream Interstate is currently built using the Mercedes 3.0 liter turbo-diesel V6 engine with a 7-speed automatic transmission. Producing 188 horsepower and 325 pounds of torque, the Interstate’s powerful motor is also fairly economical, achieving 18+ miles per gallon on the highway, while also having a respectable tow capacity of up to 5,000 pounds.

All Interstates are 4×4 configurable from the factory. For easier setup and takedown, optional hydraulic leveling jacks are also provided. Available as an add-on option, the air ride suspension helps smooth out the road’s bumps and can assist when driving in windy conditions.

Lastly, if there isn’t an option you want available from the factory, there are likely dozens of aftermarket outlets across the country that specialize in modifications to the Airstream Interstate since this van has been around for a while.

While a brand new Airstream Interstate direct from the factory isn’t cheap with a starting price of over $190,000, these dependable rigs have been manufactured for decades which means there is a large market of gently used Airstream Interstates for sale that helps lower the burden of entry for individuals with a budget who are eager to join the Airstream family.

Here at Classic Vans, we can help you find the best travel vehicle with the features you desire at a lower price point. Rest assured that you won’t be disappointed if you choose to buy an Airstream Interstate. Its ease of use, coupled with its quality of build and impressive capabilities, makes the Interstate incredibly versatile and reliable.

If you’ve longed for a “silver trailer” but are seeking the simpler side of camping without the hassles of hooking up and towing a trailer, the Airstream Interstate may just be the everyday vehicle for you. It not only represents a love of traveling, but a lifestyle—a way of life—that is synonymous with Americana.

With decades of specialized van sales and knowledge, let Classic Vans be your first and last stop when it comes to purchasing your perfect travel vehicle.

New and Used Airstream for Sale 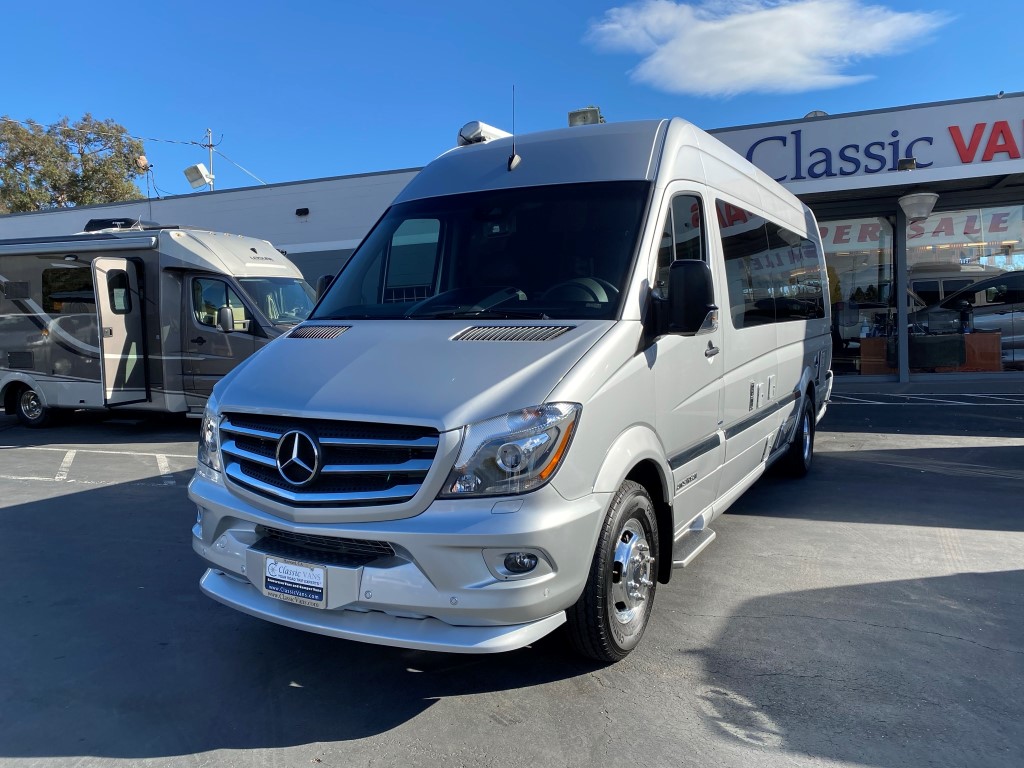 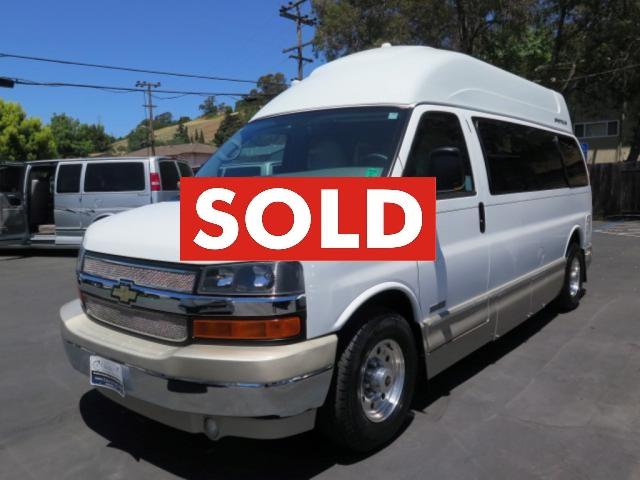 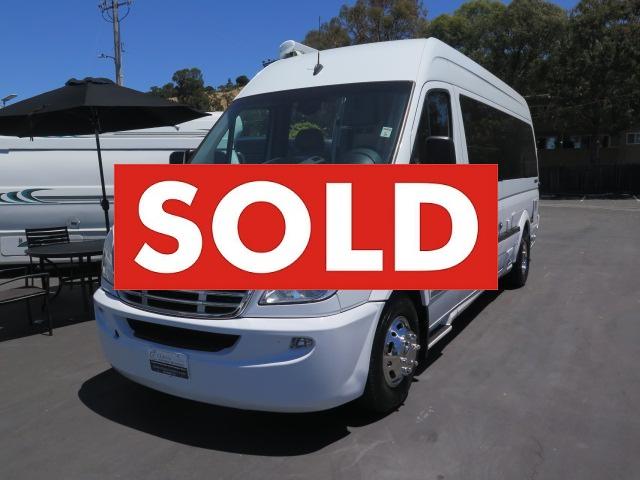 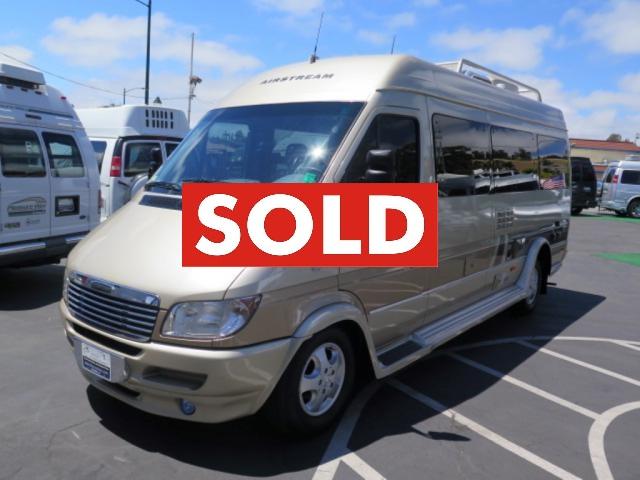 “If you’re in the market for an RV, van conversions and/or rampvans this is the place. Helped a disabled friend purchase a rampvan from Jonathan and we were pleased with the variety that was displayed and the selection that we made. Would definitely do business with them again if the opportunity arises. I would also recommend this place to family and friends.”